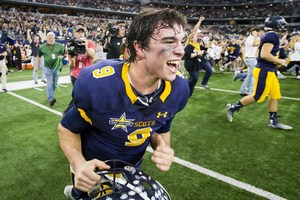 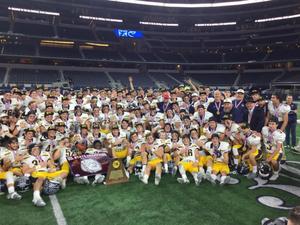 The thrilling 53-49 victory earns back-to-back titles for the Scots.
For the fifth time in Highland Park's storied football history, and for the second year in a row, our Scots are state champions! Highland Park defeated Manvel 53-49 in a win for the ages at AT&T Stadium to capture the UIL 5A Division I championship. The Scots' previous titles came in 1945, 1957, 2005 and 2016. The Scots have been aiming for a repeat all season--something the Highland Park football program has never accomplished until last night.
"I am beyond proud of the 2017 Highland Park football team for winning back-to-back state championships," Head Coach Randy Allen said. "The character, competitiveness and resiliency displayed by the Scots throughout the season was outstanding and it was on full display in the championship. This was truly a team victory and adds to the timeless tradition of our HP football program. Manvel has an outstanding team and we congratulate them on an incredible season."
"Watching this Scot team, coaching staff and community during the last six weeks, but especially during the championship, has been an extraordinary privilege," HPISD Athletic Director Johnny Ringo said. "The collective accomplishments of these young men will be a special memory for many in this community for decades to come."
As the clock ran out, joyous Highland Park players and coaches celebrated on the field, closely followed by what seemed to be half of the population of the Park Cities. Quarterback John Stephen Jones was named the game's Most Valuable Player after throwing for 561 yards, setting a UIL record.
"This game was such a special moment for every Scot fan, and especially for our students," Superintendent Dr. Tom Trigg said. "The Scots have always had a proud football tradition, but back-to-back state championships are very difficult to accomplish. I am incredibly proud of our students and coaching staff for their hard work and the positive way they represented Highland Park High School throughout the season."