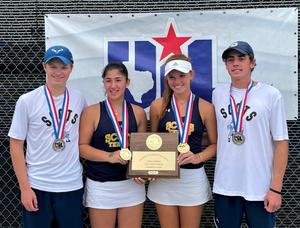 Isabella McElfresh and Eden Rogozinski defeated Amarillo High School 6-2, 6-3 to win the UIL 5A Girls Doubles Championship April 27. Ray Saalfield and Carl Newell were runners-up in boys doubles after a tight match, narrowly losing to Amarillo High 6-4, 3-6, 5-7.
"I'm so proud of both of our double teams," Head Coach Dan Holden said. "Eden and Isabella put together a dominating tournament performance and definitely deserved to win the State Championship. Ray and Carl came up a little short in the championship match, but they definitely battled their hearts out and I couldn’t be more proud of their effort. Isabella and Ray are both seniors and they end their HP careers with six state medals apiece."
"What a great two days of state tennis competition for Highland Park!" HPISD Athletic Director Johnny Ringo said. "Congratulations to our girls doubles team of Isabella McElfresh and Eden Rogozinski who went 3-0 in matches to win the 5A state championship! Their dominating play was a sight to behold! Our boys doubles team of Ray Saalfield and Carl Newell went 2-1 in matches losing in three sets in the championship match to win the silver medal. The boys definitely were an example of 'Scottie Fight Never Dies' and I am very proud of them!"
The Scots took home their 22nd team title in the fall and have been celebrating 100 years of tennis at HP this year.